Return to all news

Key information from the past week 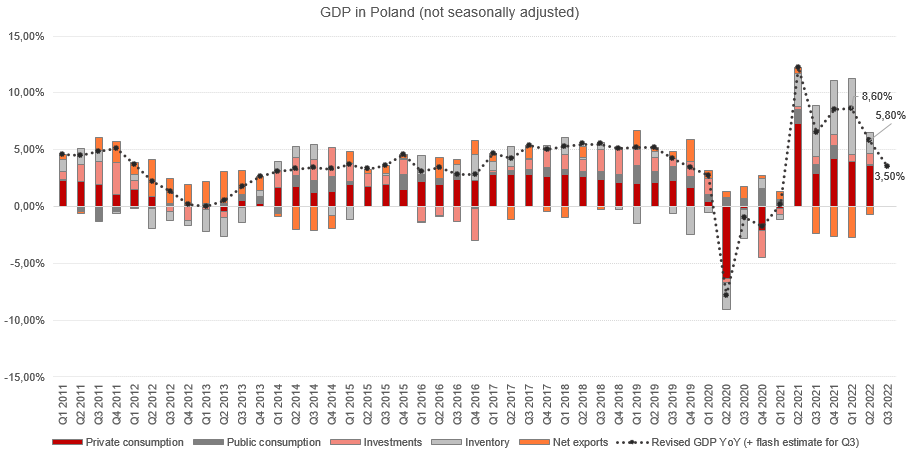 2. Poland: Inflation
Statistics Poland confirmed the preliminary consumer price estimate, as per which consumer prices in Poland in October 2022 increased by 17.9% YoY (or 1.8% MoM). Energy carriers and prices of food and non-alcoholic beverages had the greatest impact on annual and monthly consumer prices. Prices of fuel for private means of transport rose MoM after declines reported as of June. Core inflation rose from 10.7% in September to 11.0% in October. 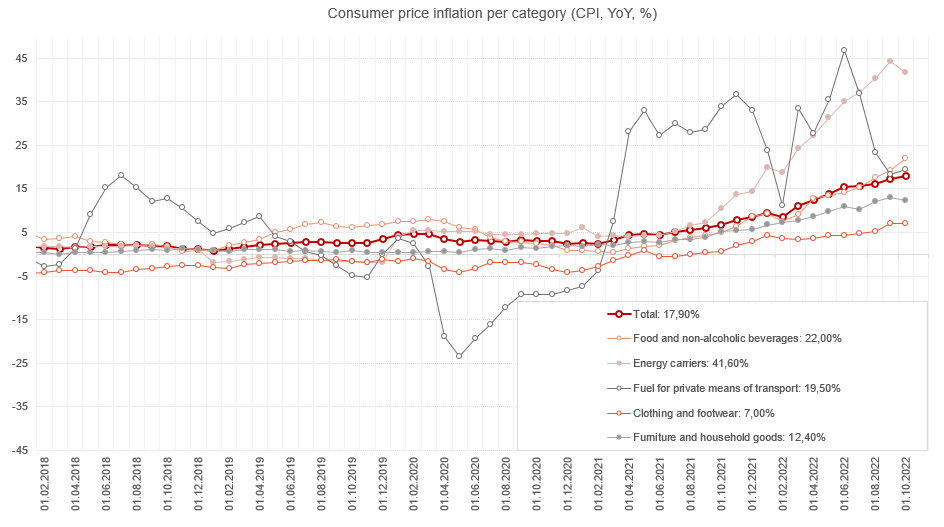 The annual GDP growth rate is projected, with a 50% probability, to fall within the range of 4.3% to 4.9% in 2022, -0.3% to 1.6% in 2023 (vs. July forecast of 0.2%–2.3%), and 1.0% to 3.1% in 2024 (vs. 1.0%–3.5%). The 2023 forecast assumes the expiration of most solutions concerning energy carrier taxation in 2022 (tax cuts under the Anti-Inflation Shield) and limited application of the Anti-Inflation Shield in 2023. The forecast also takes into consideration gas, heating and electricity tariff adjustments. The forecast indicates that all GDP components will report a decline, and the inventory change rate (inventory accumulation) – a slump. However, the positive impact of net export should increase. Gross fixed capital formation (investments) YoY should drop to approx. 0.0% at the beginning of 2023, while the potential product growth rate as estimated by the NBP should stand at approx. 3%. Therefore, the main forecast (or the so-called central path of inflation growth) shows GDP growth rate lower than the potential GDP growth rate, and a negative demand gap, which should lower the inflationary pressure.

4. Poland: Trade balance
According to the preliminary estimate released by the NBP, total imports in September 2022 amounted to PLN 144.8 bn (YoY + 33.8%), and exports to PLN 135.1 bn (YoY 30.3%), which means Poland’s trade balance recorded a deficit of PLN 9.7 bn. High annual growth rates predominantly result from high price rises. The service balance was positive (PLN 13.0 bn), but it did not offset the negative primary and secondary income balances. As a result, current account balance was negative and amounted to PLN -7.4 bn.

7. USA: Producer prices (PPI) and production
After consumer prices rose less than expected, producer prices increased in October to 8.0% YoY (less than the 8.4% market consensus), while September data were revised downward by 0.1 p.p. Excluding food and energy, the core PPI stood at 6.7% YoY (less than the 7.2% market consensus). Compared to September, producer prices fell 0.1%, with the September data revised downwards from 0.4% to 0.1%. A decrease in production was accompanied by a decline in total capacity utilisation from 80.1% in September (revised from 80.3%) to 79.9%, contrary to an increase projected by analysts. However, looking at the overall U.S. economic activity, real GDP is expected to rise by 4.2% in Q4, as per the GDPNow model estimate for real GDP growth released by the Federal Reserve Bank of Atlanta. This means a significant improvement following the last estimate, i.e. an increase by 1.2 p.p. versus the estimate released on 19 October 2022.